On a cloudy Monday, we take a cab and head south through Hualien County toward Taitung. The roads are lined with taro fields, rice fields, and fields with banana, pineapple, and papaya trees, like my mom’s childhood hometown once was. “This is the last non-industrialized part of Taiwan,” our driver tells us.

He turns a typically three-hour long drive into a full day’s journey, taking us to Liyu Lake, Yun Shan Shui, and Brown’s Road – previously obscure landmarks now overrun with tourists like us. “It’s like a night market now,” our driver says of Yun Shan Shui, a dream-like lake in Shoufeng. He drops us off in Taitung, where we stay the night.

Tuesday greets us with the first sunny day of our trip – 70°F in December – and so I go for a morning run, first through the courtyard of a museum, then through the outskirts of Taitung. 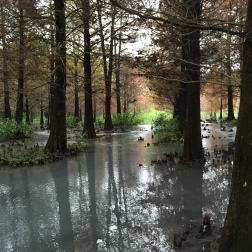 On Tuesday afternoon, we head from Taitung to Kaohsiung (pop. 2.8 million), the home of a major seaport, and my Gandie‘s (godfather’s) hometown. On the train, I make progress on reading Lauren Hillenbrand’s Unbroken (a Christmas gift from my friend Greg), the story of Olympic runner and World War II airman Louis Zamperini.

As I read Unbroken, the train runs along the ocean and weaves through coastal towns. Taiwan was a Japanese Colony during the War, the site of several Japanese military bases and multiple U.S. bombing raids. I look out the train window at the gentle waves of the Pacific, finding it hard to believe that the war was unfolding here just two generations ago.

We get to Kaohsiung and I’m in my element, navigating us through public transit and city streets. We explore the Pier-2 Art Center, where industrial warehouses have been converted into colorful galleries, then take a short ferry ride to Cijin Island to watch the sunset from the granite-colored beach. 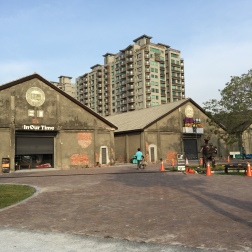 My brother and my parents are ready to call it a night after dinner, at least travel-wise. “It’s only 7:30!” I protest to no avail. Relaxation stresses me out, so I wander through Kaohsiung alone, weaving through mopeds on the street and learning the subway system. I find myself at a night market, which is buzzing on a Tuesday night with locals and tourists from Hong Kong and Japan.

I slip back into the hotel as the subway closes for the evening and deliver a midnight snack of fried chicken bites and tiramisu.